Kate Moss has been at the centre of British fashion since the 90’s. We are all familiar with her famous face, but not so much with the voice that goes with it. This is because for much of her fashion career, Kate Moss avoided appearing in radio or television spoken interviews. After keeping silent for so long, Kate Moss is increasingly appearing once again in video in spoken interviews. This post speculates as to why Kate Moss was silent for so much of her time in the public eye, and why only in the last few years she is breaking her silence. 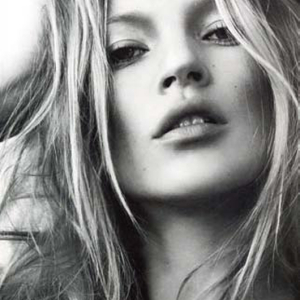 Originally from Croydon, London, Kate Moss has an Estuary English accent. Below are some of the pronunciation features observable in her accent:

At the time Kate Moss rose to fame in the early 1990’s, the British media was not as diverse as it is today in terms of the accents it portrayed. In the British public eye at least, there was very much still a sense of what is the ‘right’ way to speak and of how English ‘should’ be spoken. When people in the public eye did not speak in the so-called ‘right’ way, then written complaints were often made to the BBC. One show in particular called ‘Points of View’ would feature letters of complaint focusing on issues of language or grammar and the supposedly ‘right’ way to say things. Although the pedantic British public has nothing to do with Kate Moss herself nor her decision not to speak in public, it does serve to evoke the kind of Britain she was living in in terms of accent and speech—one where you would have been openly judged or publically criticized for not speaking supposedly ‘correctly.’ As an Estuary English speaker with South London pronunciation features in her accent, Kate Moss’s accent is anything but ‘proper English’.

The fashion world within which Kate Moss rose to prominence was one in which the glossy magazines ruled the day. It really didn’t matter if Kate Moss didn’t appear in spoken television or radio interviews—she didn’t have to—because she was still fronting advertising campaigns for the world’s biggest fashion brands. Perhaps, then, Kate’s decision not to appear in spoken recorded videos was nothing more than a calculated, clever P.R. decision. By not speaking in public, it could even have served to make Kate (the fashion brand) more elusive and compelling.

If Kate’s decision to be quiet in the public eye was a calculated P.R. move, it was an effective strategy for its time. Importantly however, it’s a strategy that probably wouldn’t work so well today now that video has such an important role to play in advertising and marketing. The top models of today are required to have their personalities fully present in their videos. In the example video below from the Mango autumn/winter campaign 2015, we find out what Kate Moss and Cara Delevingne “ave in common”:

Kate Moss is not shy. We know this because she is enjoys hosting large parties for her celebrity friends. However, based on glimpses I caught of her while researching this post, it struck me that Kate has a vulnerable, self-conscious side to her too. I wonder if Kate could be confident, outgoing and expressive when in her comfort zone in front of the photographer’s lens and at the centre of the party, but otherwise may suffer from anxieties related to speaking in public, in particular when being interviewed? Could it be that Kate Moss avoided being interviewed on television and radio for so long because the direct questioning would cause her to experience panic? I speculate that this may be so because I recognised myself in Kate’s started ‘rabbit in the headlights’ expression when watching her early interview clips. To explain what it feels like, it’s like your mind going blank and not being able to express yourself in specific speaking situations that trigger panic. There is no way of knowing for certain but it looks to me that Kate experiences the same kind of speaking anxiety when in spoken recorded interviews. In the clip below Kate self-consciously rubs her neck and stutters while talking about the charity War Child:

Note: if Kate does suffer from public speaking anxiety and panic, although it may not look that bad on the outside, on the inside it can feel like overwhelm, stunned and startled all at the same time.

For me, Kate Moss’s charm stems from her authenticity. When she’s being interviewed, it’s as if she is unable to hold anything back to the extent you can see the meaning behind her every look, word and expression. She may not always speak fluently, particularly in her early interviews, yet still, each clip of her speaking leaves a striking, magnetic impression on the viewer. She has a kind of raw authenticity that is incredibly rare in the public eye; she doesn’t seem to be able to shield herself to hide/protect who she is inside from the public gaze. I can see how that quality would make being interviewed feel overwhelming.

In recent years Kate has begun again to appear in recorded interviews. Glimmers of self-consciousness are still there, but the Kate of today is able to speak well when being interviewed and seems to even enjoy herself. Importantly however, these recent interviews featuring Kate on YouTube are ones where she is being interviewed by old friends such as Kate Phelan, Director at British Vogue, or Nick Knight, Photographer. If Kate does happen to suffer from public speaking anxiety or panic, being interviewed by friends within her comfort zone is something that could make a big difference to her interview performance; it could make all the difference between having a fun time or experiencing a ‘rabbit in the headlights’ moment of panic during the interview.

Whether or not Kate Moss does experience anxiety or panic in particular interview situations, it’s a great thing to see her facing her (potential) fears and speaking to camera again. She’s magnetic, and it’s fascinating to see more of the personality behind her famous image.

What Accent Does Cara Delevingne Have? Voice and Speech Analysis CLICK HERE.

Quickly remove these embarrassing mistakes by signing up (for email subscribers only).

Jade Joddle is a speech and voice teacher for high-level professionals. She teaches her non-native speaker clients to Speak Well so that they thrive and succeed.

Voice Tip for Your British Accent